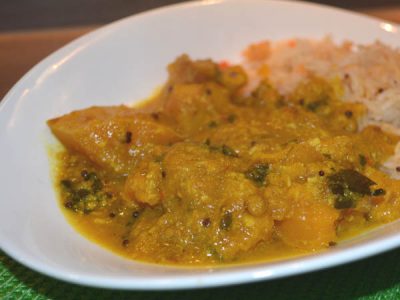 Pumpkin or squash have become such a popular autumn food that I decided it was time I found an Indian recipe with pumpkin as the main ingredient. So I found this one called Nadan Mathan or for us pumpkin curry is a popular vegetarian dish in from the state of Kerala in southern India. This dish I hear, is usually cooked during the festivals, which they tend top have a lot of in India!

So, I decided to make this dish using a Butternut pumpkin and it worked really well and what I found really good was the frying of dried chilies, with mustard seeds and the lentils, in fact I would probably add more lentils next time as they really made the dish for me as they had a bit of give to them but still retained some crunch.

Anyway, whilst I was making this dish I realized that I didn’t have enough dessicated coconut, so I added cashew nuts and a drizzle of mustard oil. Fenugreek seeds were added and Methi, which is dried fenugreek leaves and I also added a red onion that I sliced thinly and caramelized and I felt that these extra ingredients really add to the flaovour making it a better dish!

Place the diced pumpkin in a large pot and pour in the 500 ml so the cubes are floating. Season with turmeric and salt then bring the pumpkin to the boil and cook until the pumpkin is tender yet firm, about 15 minutes.

In a food processor blend the 25 g grated coconut, 25g cashew nuts, 3 dried red chili peppers the green chili, 2 tablespoons water, cumin seeds and the mustard oilinto a paste, then add it to the pumpkin give it a good stir, add the diced tomato and bring to the boil again. Reduce to a simmer and cook until the liquid has thickened and coats the pumpkin cubes, about 5 to 7 minutes.

Pour into a large serving bowl.

Now heat 2 teaspoons of coconut oil in a small pan add the onion and fry for a few minutes until it starts to caramelize then add the 2 dried red chili peppers, mustard seeds, fenugreek seeds, the dried fenugreek eaves and the black lentils in hot oil until they start to spit, about 2 to 3 minutes and pour over curry.

Heat the remaining teaspoon of coconut oil in the pan and fry 1 tablespoon of grated coconut until it has completely browned, about 3 to 5 minutes, then sprinkle on top of the curry.

Garnish the dish with the curry leaves.

Serve with some plain rice or Roti or other soft Indian bread.