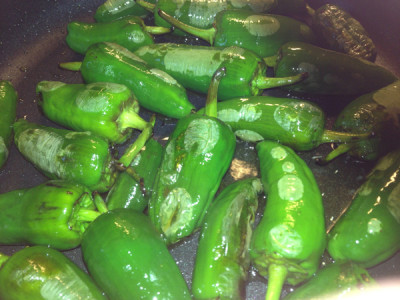 For many years I had seen Pimientos de Padrón on menus whilst holidaying in Spain but had never really seen the point in ordering a bowl of fried chillies sprinkled with sea salt, especially at €3 for a tapa or €6 as a portion or ración as it is appropriately named. However, once again Rick Stein to the rescue!

In Rick Stein’s Spain, he was in a really old traditional Spanish bar and he ordered a ración of Pimientos de Padrón and they looked really good. As usual Rick thought they were really tasty and advised that they are not too hot but have a nice peppery sort of earthy taste but every now and then you will hit upon a hot one! Well, I was out shopping at my favourite and came across Padron Peppers! Have them I thought, and bought a pack. Fried in good Spanish olive oil to almost burnt. In Jamie Olivers words charred and there is a big difference between charred and burnt! Really! So I fried some up and when charred I sprinkled them with sea salt, Spanish of course and then served them up. All my guests that eveing were curious but they all tried them. Alas no hot one!

I have since knocked these up many times and most of the older generation of mortals around me cannot see the point, but I love em!

So, there is no real recipe for them, just buy enough Padron peppers as needed to snack and fry them in some Spanish olive oil until they take on a charred look, then remove to a casuela and serve these in the middle of the table for all to dig in.

I hope you hit the hot one! I’m still waiting, or perhaps I’m used to the heat?