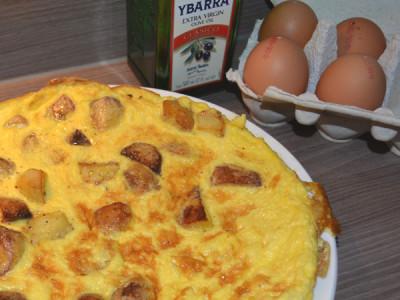 Tortilla Espanola or Tortilla de Patata which is in fact the Spanish Omelette is one of those Spanish dishes that can be eaten any time of day whether as a tapa or a light snack. You will find it as a side dish at breakfast. It will be served up as a tapa any time of day and it is also served up in a baguette, called a bocadillo and can be found evrywhere from the airport to football stadiums! With onion in it is called a Tortilla de patatas con cebolla but I usually cook this with onion anyway just for the extra flavour and I think you will agree. You can also add diced peppers and coen too if you wish.

I once ordered Tortilla Espanola at a restaurant in Canada and was horrified to be served an omelette with a big dollop of salsa in the middle! Aargghhh!

You can make Tortilla Espanola in advance and it will keep for a few days in the fridge too!

Cut the peeled potatoes into nice bite sized pieces, place in a bowl and toss with some salt and black pepper. In a pan or skillet heat about 1/4 cup of the olive oil over medium heat, add the potatoes and cook, tossing them or turning occasionally with a spatula, until golden and crisp. Then set the pan to one side.

Now heat 2 tablespoons of the olive oil in another pan or skillet over medium low heat and saute the onions, stirring occasionally, for about 20 minutes, or until very soft and slightly golden.

In a large bowl, beat the eggs together and stir in some salt and pepper maybe even a good pinch of smoked pimenton and add the onions. Remove the potatoes from the pan with a slotted spoon and let them drain for a moment in a colander. Wipe the potato cooking pan clean with a paper towel, then add the remaining oil to the pan or skillet. Heat over low heat, stir the potatoes into the egg mixture in the bowl and pour it into the hot pan or skillet. Cook for about 8 minutes, or until the bottom of the omelette is slightly golden. Place a large plate upside down on top of the skillet, invert it, and turn the cake onto the plate. Slide the cake back into the pan. Finish cooking in the oven for 4 to 5 more minutes, or until the eggs are set.

Cool in the pan for a few minutes, then cut as you would a cake or into squares.