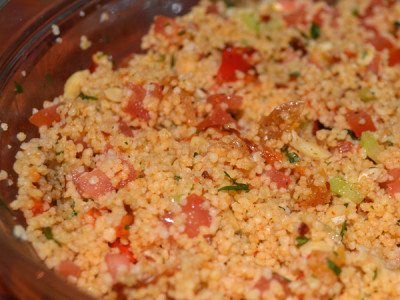 This salad is based on one of the staple foods of North Africa also known as “Seksu” or “Kesksu” it is a traditional Berber dish of semolina (granules of durum wheat) cooked by steaming. Of course these days we can buy 5 minute couscous so we don’t need to go through the process of steaming, all you need is to add to the couscous the same amount of boiled water and leave covered.

This version is made as a salad although it is traditionally served with a meat or vegetable stew spooned over it.

Now this recipe is not set in stone so sometimes the ingredient differ depending on availability. However, the first step is to put your cup of couscous into a bowl and pour in a cup of boiling water. Cover and leave. Now put your peppers under a grill and char. If you have gas then use a gas ring and hold the peppers over the gas until the skin burns. When the peppers are grilled put them in a bowl and cover with cling film. This makes them easier to peel.

When the peppers are cooled enough to hold, peel off the skin, remove the seeds and chop into small pieces and keep the liquid. Remove the cover from the couscous and stir with a fork to seperate the granules. Of course traditionally this would all be done by hand and take ages. Back to to process, add the ingredients to the couscous and give a good stir to mix them well. Pour in the juice from the peppers too. Basically add to the couscous any of the ingredients if you feel the flavour is not quite right. Leave in the fridge to chill before eating as this intensifies the flavour too!