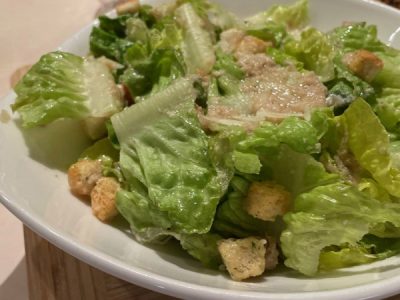 This salad was probably the most popular salad on any menu in North American at one time, but it does have many variations, mainly by topping the Caesar salad with grilled chicken, steak, or prawns.

My history of the Caesar, was that I first tried in Vancouver, B.C. and I hadn’t even heard of it before. Maybe because I had never ordered a salad before! But I must admit that this was an extremely tasty salad with a dressing and a step up from Thousand Island dressing.

Living in Berlin, Germany I found that there was a salad dressing missing and although you can readily get Caesar dressing now  in most supermarkets now, for a long time you couldn’t. I had to get a recipe for myself and have now put a stamp on it that most people consider mine to be the best in Berlin. At least better than what I have tasted, including the Midtown Grill’s version!

So a brief history of the Caesar salad is that it was actually first created in Tijuana, Mexico in 1927. I know that sounds strange, but true. The creator was an Italian immigrant who had lived in the US, but moved south of the border to avoid prohibition. His name was César Cardini and he built a hotel with a cantina and Italian restaurant back in the early called Caesar’s Hotel. The recipe for the Caesar salad arose when Cardini, the chef and owner was  treating some friends to dinner, but had few ingredients so the friends told him not to worry and just make an appetizer. He placed some lettuce leaves in a bowl and tore them up to make it look like more then he mixed some ingredients together to make the dressing and the Caesar salad was born. In his honour it was named after him and each year a festival is held where around 30 local restaurants participate. The yearly Caesar`s Salad Festival takes place on Revolución Avenue between 4th and 5th streets every June.

To this day the salad is served there and made at your table in a large bowl using the same ingredients.

This salad is easy to make, delicious to eat and to my knowledge this is the original version!

In a pan heat up some oil but not the oil set aside for the dressing. Season the oil with a clove or two of garlic, salt pepper and throw in the diced bread and fry until golden. Set aside and drain. Cut the bottoms off the lettuce and pick off any bad leaves and tear the leaves into nice chunky pieces and put into a salad spinner sieve. Rinse and give a good spin! Yes, I am one of those people that actually use a salad spinner! Pat dry the leaves and set aside.

In a blender or food processor put in your Parmesan cheese, anchovies, crushed garlic, lemon juice, mustard and blend then trickle in the oil and blend until a good mix. Season with salt and pepper.

Put salad leaves in a bowl with half the croutons and a sprinkle of Parmesan then pour over the dressing. Mix well and then if you have another cleaner bowl, put the mixed salad in there and sprinkle over the rest of the croutons and grated Parmesan, a grind more of black pepper and serve. Make sure you get some as this will go in a flash!

For a creamier dressing add an egg yolk after the oil and blend until it has a mayonnaise type consistency.

This is such a hit when I BBQ that I sometimes have to make another batch!