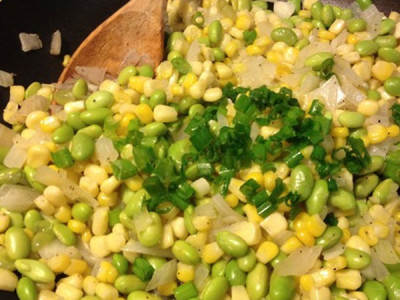 I had heard of Succotash, but never had the chance to try it. I just love the name, well of course it was a phrase used by Sylvester the cat! Remember that “sufferin’ succotash” he said in exclamation with his lisp?

Anyway, this recipe comes from Rick Stein’s Seafood Odyssey where I first succotash and he makes it to go with grilled fish I think, but if you like corn and beans succotash makes a great side dish when grillin and chillin!

Put the dried beans into a pan and cover with plenty of water. Bring to the boil, then cover, remove from the heat and leave to soak for 2 hours.

Fry the bacon in a pan over a low heat until the fat begins to melt. Increase the heat a little and allow it to fry in its own fat until crisp and golden. Add the onion (and the sunflower oil if it looks dry) and cook for about 5 minutes, until soft.

Drain the beans and add them to the pan with the stock. Simmer gently until they are just tender and the stock is well reduced.

Stand the sweetcorn up on a chopping board and slice away all the kernels or add two large tins of corn if fresh not available. Add the sweetcorn to the beans with the cream or milk and simmer for 5 minutes.

Stir the chives into the beans and season with salt and pepper.

Spoon the mixture into serving bowl and sprinkle over a few more chopped chives and serve.