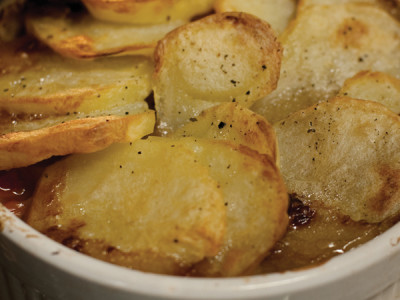 This classic British dish once adorned nearly every pub menu the length and breadth of old Blighty and is one of a dying breed of traditional British mainstays but sadly is now on the British Endangered Food list!

On my last trip to the UK I had difficulty finding a pub that did traditional British food. There were plenty of curries, burgers, one pub specialized with a Thai menu and another mussels a la French style! It’s really too bad what is happening to some great food!

For those of you who have never heard of this dish before, Lancashire Hotpot is a traditional classic recipe from Lancashire in north west England made with diced lamb or mutton and onions seasoned with only salt and pepper with a lid of sliced potatoes and baked in a low oven for a couple of hours and this dish deserves a place in everyone’s home not only for it’s simplicity but like the Irish Stew it is a great heart warming meal to have on a cold winters evening or a cold summer evening like I am having at the moment.

Traditionally this dish was made with lamb or mutton and onions seasoned with only salt and pepper with a lid of sliced potatoes and baked in a low oven for a couple of hours. Sometimes oysters were used as well, but these days they are not used. Also beef is often used instead of the lamb along with root vegetables such as carrot and turnip and maybe leeks and I always like to add a few herbs into the mix.

Certainly in mind mind these one pot meals are simple to prepare and no fuss cleaning up after!

Heat the olive oil in a pan and brown the lamb pieces then remove from the pan and set to one side.

Add the stock to the pan along with the thyme, bay leaves and Worcestershire sauce. Stir and simmer for 8-10 minutes, or until thickened slightly.

Butter a high-sided casserole dish and arrange about a third of the potatoes in the bottom. Season them and sprinkle with a little thyme. Top with the meat and bay leaf and season in the same way, followed by the onions, seasoned in the same way.

Arrange the rest of the potato slices on top of the onions like overlapping fish scales, and season these with salt and pepper. Pour enough stock over the potatoes to just come up to the base of the topping then brush with melted butter.

Serve up and enjoy!