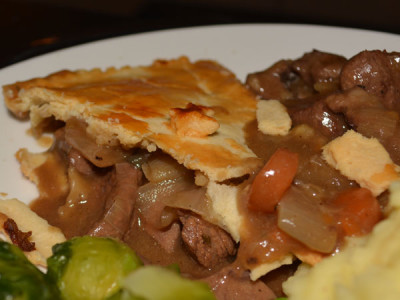 But we do all love a good pie. My favourite would be the pasty, doh, yes missed that, there is also a pie called a pasty and yes there is also another called a clanger! Recipes of these to follow, but right now let’s get to the pie.

Pie, mash and liquor is a traditional East London dish of a minced beef and onion pie served with mashed potato and liquor, the pie used to be eel pie, but in the 20th century minced beef became more popular as a filling, but nowadays you can find places that have gone back to using eel as well. The liquor, which is a green gravy is a parsley sauce that uses the liquid from the stewed eel as a base, although this is not always the case.

But as this is more of a localised delicacy, I would probably say that traditionally the steak and kidney pie or steak and ale pie are the most popular.

My recipe here is for a steak and kidney pie. As I live in Germany, it is not as easy for me to buy ox or lamb kidney so I used pork, but with more planning I would definitely use ox or lamb.

For the filling:
Place the flour in a large bowl and season well with salt and ground black pepper, dice the steak into 1 inch (2.5 cm) cubes, trim the kidney and chop it into similar sized pieces as the steak or smaller if you prefer. Then dredge the steak and then the kidney into the flour making sure it is evenly coated. I usually keep the steak and kidney separate as I cook them separately too.
Heat the butter and oil in a large pan until the butter has melted. Add the meat in small batches until the meat is nicely browned then remove with a slotted spoon then do the same with the kidneys.

Add the onions and carrots to the pan and fry gently for about 5 minutes or until the onion is soft then return the meat to the pan, give it a good stir. If you are using a stock cube or gel then use boiling water, if using stock warm the stock up before adding. Season with plenty of black pepper and a little salt and of course the shot of Worcestershire sauce. Bring to a gentle boil, cover with a lid and reduce to a gentle simmer. Cook slowly for a couple of hours or until the meat is nice and tender and the sauce thickened. Remove from the heat, place into a 26-28cm deep pie dish and leave to cool completely.

Whilst the meat is cooking sift the flour into a bowl with a pinch of salt. Cut the butter into little cubes and when adding it to the flour ruub it in with your fingers until it is almost like a crumble mix. Add a couple of table spoons of cold water and mix to a dough. Wrap in foil and put in the fridge for an hour or so.

Bring the dough out and let it warm a bit and roll out to a size larger than the pie dish. Now the amount I made here was only enough for a lid on a 28 cm pie dish, so if you are making a smaller deeper pie, you will probably have enough for the base too.

Roll out the pastry to 1/8″/3mm and large enough to cover the pie dish, cut a tiny whole in the centre to slip over the pie funnel. If you don’t have a funnel them make sure you put a few cuts into the pie lid to let steam escape. Place the pastry over the dish and the funnel pressing it down, trim to fit the rim of the dish. Crimp the edges using your thumb and first finger then brush the top with the beaten egg mix. Bake for 40 minutes or until the pastry is crisp and golden. Serve immediately with seasonal vegetables.

Double the amount of for the pastry and make a base and lid for your pie. Blind bake the base for about 10 minutes, first fork a few holes in it then cover the base with baking paper, pour over dried beans or baking beans. This ensures that the base is cooked and doesn’t go all soggy when you bake the pie.