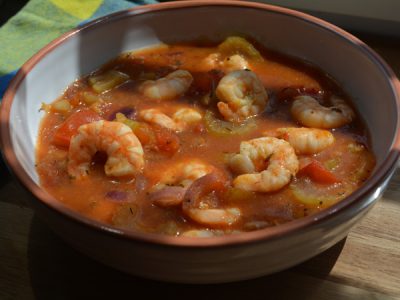 Jambalaya is a dish from Louisiana originating from Spanish, African and French influence, consisting mainly of meat and or seafood and vegetables mixed with rice.

I first tried this when I was living in Canada and just loved it.

Traditionally, the meat always includes some sort of sausage, such as andouille or garlic sausage, meat such as pork, chicken along with some seafood such as crayfish or shrimp.

The vegetables are usually a sofritto like mixture known as the “holy trinity” in Cajun cooking, consisting of onion, celery, and green bell pepper, though other vegetables such as carrots, tomatoes, chili and okra are also used. After browning and sautéing the meat and vegetables, rice, seasonings, and broth are added and the entire dish is cooked together until the rice is done.

This is of course a very light version using the broth, vegetables and a measured quantity of meat and or seafood. Never the less a tasty diet meal though!

Pour lemon juice into a pan then lightly sauté the shrimp with the celery, tomato, garlic and onion until cooked.

Remove the shrimp and deglaze the pan with the cup of broth, add the seasonings and bring to a boil.

Reduce and simmer on a low heat for approximately 20-30 minutes until liquid is slightly reduced then add the shrimp to warm them up just before serving.

Top up with water if needed.

Pour into a bowl and serve.