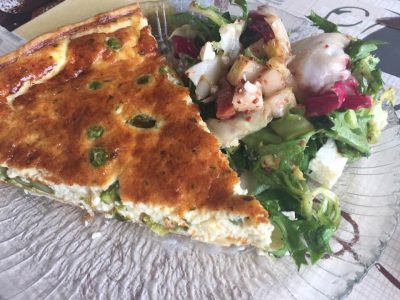 Growing up this was a dish my stepmother made fairly often, but I don’t ever recall it being called Quiche Lorraine! In England we do have an egg and bacon pie which can be quite similar.

Anyway, I never liked the pie we had because it seemed that the bacon was always wobbly and never crisp, so it wasn’t until I was older that I actually tried and fell in love with Quiche!

Quiche Lorraine is considered a “Classic” French dish, but we have been baking similar pastries in the UK since as early as the 14th century!

For the shortcrust pastry:

For the shortcrust pastry put the flour, butter and a pinch of salt in a bowl or food processor and process briefly or if making the pastry by hand, rub the butter into the flour until it resembles coarse breadcrumbs then using your hands add just enough egg to bring it all together.

In the food processor add half the beaten egg and continue to process until the mixture is just moist enough to come together.

With your hands, flatten out the ball of dough until it is about 2cm thick, wrap it in cling film and put in the fridge for at least 30 minutes before using.

Line a 20cm high-sided tart tin with the pastry make a few pricks in the pastry with a fork and cover the base with baking paper then cover with baking beans or dried peas and bake blind for 10-15 minutes. Remove the beans and parchment for the last five minutes of baking for a golden crust.

For the filling just heat the oil in a frying pan and cook the bacon for 5-6 minutes until nice and crispy. Remove and drain on kitchen paper. Sweat the onions gently in the same oil for a further ten minutes, or until softened. If you don’t like to use the fatty bacon you may substitute with ham for a lighter version.

In the meantime whisk the two whole eggs and two egg yolks in a large bowl, add the cream, (use milk for a lighter version) herbs, cheeses and bacon and the onion. Mix well and season with salt and black pepper, then pour into the pastry base and return to the oven to bake for 30 – 40 minutes or until the middle has set and it is a nice golden colour.

When ready let it sit to cool for about 20 minutes then serve warm with a salad.

Of course you can put whatever you like in a quiche, this is the traditional version, but it’s also great with some ham and cherry tomatoes, asparagus, smoked salmon for example.