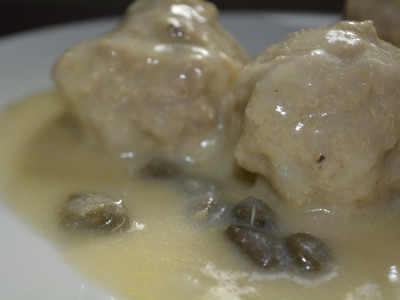 I really don’t know why but the Germans like to eat sour things and Königsberg Klopse is no exception with the sourness coming from kapers, which the Germans use quite often.

The dish is named after the former Prussian city of Königsberg (now called Kaliningrad). In the German Democratic Republic (GDR) or what we called East Germany, the dish was officially called Kochklopse (“boiled meatballs”) to avoid any reference to its namesake city, which as we all know had been annexed by the Soviet Union.

Basically this simple dish is meatballs in a white kaper sauce. Traditionally minced veal was used and anchovies were used to season the meatballs.

Soak the bread rolls in water for about 10 minutes or so. Peel and chpop or grate the onion. After the bread has soaked squeeze out all the liquid and add it to the minced meat. Add the onion and the egg and mustard, some salt and pepper and mix well. In a pot bring the vegetable broth to a boil then take off the heat now wet your hands and shape the meat mix into palm sized balls then place them into the vegetable broth and bring to the boil. Skim of any surface foam and reduce heat to a simmer until the meatballs are cooked. Strain off saving about 500ml of the broth.

To make the sauce melt the butter in pot and add the flour to make a rue. Stir until the flour, butter mix is golden, continue stirring and then pour in the broth and stir or whisk making sure it’s not lumpy. Bring to a boil and then simmer for about 5 minutes. Beat the egg yolk and add it to the milk and pour into the sauce and stir. This will help thicken the sauce a bit more. Add the capers and season with salt, pepper and the mixed spice and lemon juice to taste. Add the meatballs and allow them to site for 5 minutes to get to know each other.

Sprinkle with some chopped fresh dill and serve this up with some boiled or mashed potato.