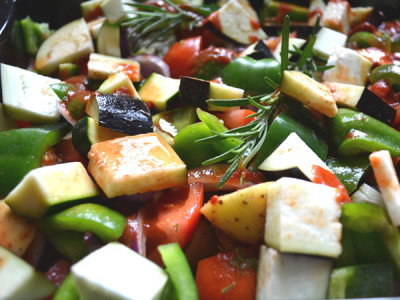 It’s funny bur Briam just doesn’t sound like a Greek dish to me and it’s one you definitely won’t find it in your local Greek Taverna in Berlin! However, this is a very popular all over Greece and it does make a fantastic side for any grilled meat or just serve it up and sprinkle some feta cheese over the the top. I love to bake this when grilling some lamb on the old rocket!

I first saw this recipe on Rick Stein’s Mediterranean Escapes when he was on the island of Corfu and visiting what was once a small mountain village, which it seems was vacated by all the residents but now a couple have opened up a restaurant there. The wife, who does the cooking, basically roughly chopped up all the vegetables, sprinkled dried herbs over the top and poured over vegetable oil and water and mixed in some tomato paste. When it came out of the oven it looked great and of course Rick just loved it! But then he has to doesn’t he ;0)

Anyway, I use olive oil with my version, but Greek olive oil. I always have 3 bottles in my cupboard, Greek, Italian and Spanish as I like to cook to an as authentic taste as possible. You can pretty up the dish if you like, slicing the veg nicely and of course you can add some passata instead of the tomato paste.

Drizzle some of the oil in a large roasting tin and spread the potatoes on the base in a single layer then season with salt and pepper. Sprinkle over the garlic and courgettes then season again, then add a layer each of the aubergine, peppers and onion, seasoning between each layer. Sprinkle over half the oregano and parsley then cover with the chopped tomato and then add the rest of the herbs and season again. Pour passata over the top or mix a good couple of tablespoons of tomato paste with some water and pour that over followed by a good drizzle of olive oil.

Cover the roasting tin tightly with foil and bake for about an hour and a half or until the vegetables are tender and browning nicely.

Remove from th oven and if you have a lot of juices in the roating tin, carefully drain some off into a pan and boil it and reduce by about a half. Pour back over the vegetables and leave to cool a bit before serving.