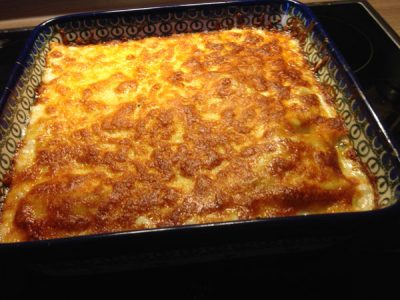 Moussaka is one of those dishes that you either like it or hate it and that is down to the use of cinnamon and eggplant or aubergine in the recipe.

In Greece, the moussaka has the egg plant and meat are layered and served hot. In Turkey, it is sautéed and served like a stew, and eaten warm or at room temperature. In most Arabic countries, a similar dish is eaten cold. Some versions are topped a with a milk-based sauce thickened with egg, sort of like a savoury egg custard or more often than not a béchamel sauce.

There is also debate on what meat should be used. I always think Greece, has to be lamb, but in Greece they more often and not use minced veal or mixed minced veal and pork together. I go for lamb because minced lamb is readily available and unless you want to mess around with a mincer this is the quickest way to go!

Meanwhile, put 2 tbsp of your wonderful Greek olive oil into a large frying pan and over a medium high heat fry the onion until soft and golden, then add the garlic, cinnamon and oregano and cook for a further couple of minutes. Stir in the lamb and turn up the heat slightly to brown the lamb well, cooking until the mixture is quite dry.

At this point stir in the tomato and wine, bring to a simmer, turn the heat down low and cook for 30–40 minutes until most of the liquid has evaporated.

Season if need be.

To make the topping, heat up the milk to just below boiling point. In another pan melt the butter and stir in the flour and cook for a couple of minutes,stirring so it doesn’t clump or burn then gradually whisk in the hot milk. Cook until the sauce has thickened then stir in the cheese until melted in.

Take off the heat and allow to cool slightly, then beat in the eggs, salt to taste and grate in the nutmeg at least a quarter. although it has a strong flavour you need it in this dish.

Cover the bottom of a casserole dish with aubergines/eggplant then top with half the meat and repeat these layers. Finish off with a layer of aubergine, on top the pour over the sauce and bake for about 45 minutes until well browned, and then leave to cool for half an hour before serving.