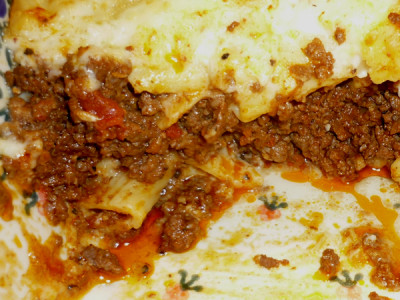 Now I always thought that Moussaka or Mousakas was the typical Greek baked mince dish, but there is another version, Pastitsio, and it is a dish that I have never ever seen on a menu at any Greek restaurant I have visited, there again I have never been to Greece!

I first saw Pastitsio being prepared by Rick Stein and I thought that it would be a great alternative to lasagne and a fun dish to do for friends on a Greek night with some cheap Retsina and a few chilled Ouzos.

The typical Greek version uses a big fat tubed pasta like rigatoni or you could use penne or something similar. I like the rigatoni because it is nice big and chunky!

The last time I made this dish I was just putting it in the oven when my youngest boy fell over as my wife opened the fridge and he split his ear open on the door. I cleaned up his ear and held him to calm him down and we then rushed off to ER in a blizzard. I left them there and came home in time to take the Pastitsio out of the oven, then back to pick them up. By that time the hunger had gone, but I managed a serving and of course a big fat glass of Agiorgitiko.

For the white sauce:

For the meat sauce, heat the olive oil in a medium-sized pan, add the onion, garlic and celery and fry until just beginning to brown. Add the minced beef and fry over a high heat for 3-4 minutes, breaking up any lumps with a wooden spoon as it browns.

Add the red wine, tomatoes, tomato purée, cinnamon stick, ground cloves, dried and fresh oregano, bay leaves, water and season with salt and pepper to taste, simmer for 30-40 minutes, stirring now and then, until the sauce has thickened but is still nicely moist.

Remove from the heat and discard the cinnamon stick and bay leaves.

Bring 4.5 litres of water to the boil in a large saucepan with a good sprinkling of salt. Add the pasta and cook until al dente, about 13 minutes, do not to overcook the pasta as it will cook a little further in the oven when baking. Drain well, transfer to a large bowl and leave to cool slightly.

For the sauce, melt the butter in a medium-sized non-stick pan, add the flour and cook, stirring, over a medium heat, for one minute, gradually beat in the milk then bring to the boil, but keep stirring and lower the heat and leave to simmer for a few minutes, stirring occasionally then season with nutmeg and salt and pepper to taste.

Stir 250ml/9fl oz (about one-fifth) of the white sauce into the warm pasta with the beaten eggs and half the grated cheese keeping the remaining sauce warm over a low heat, stirring now and then. Add more milk if it begins to get a little thick.

Grease a large, shallow ovenproof dish with the melted butter. Spread one-third of the pasta over the base of the dish and then cover with half the meat sauce.
Repeat this as if making lasagne and then cover with a final layer of pasta and spoon over the remaining white sauce.

Sprinkle the remaining grated cheese over the top and bake for about 40 minutes or until bubbling hot and golden brown.

Serve with a green salad some crusty bread and a full bodied red wine preferably Greek!