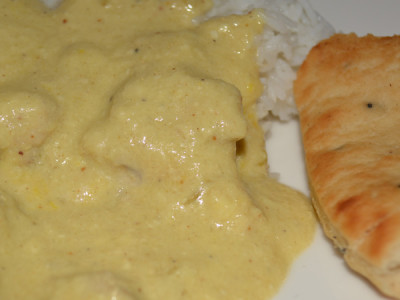 As a child I never really liked the curry my step mum cooked, mainly because she put sultanas and bits of apple in it. It was always beef, rich and deep, dark brown in colour and I’m sure it was tasty, but I never gave it a chance. Sad really, but then what did I know, I was just a kid. Later in life I had decided to take a trip to India, 4 months in fact, so it was just before then that I entered my first Indian Restaurant. I was with my older brother, already a veteran of the curry house, but me a novice, started with a chicken korma. I loved it! A nice spice but not hot, it was great, I was hooked, however, my girlfriend wasn’t too happy because apparently I smelt spicy for several days after. It was similar to when we had been to Thailand and I had my first Neua Pad Nam Man Hoy, only I was garlicy! She lived on fruit salad for the fist week of that trip, so I must have had an awful aroma about me! Anyway, that’s another story.

Back to the korma, if you don’t know what it is a dish derived from Urdu ḳormā or ḳormah, meaning “braise”,which in turn comes from Turkish kavurma, literally meaning “cooked meat”.Korma (قورمه in Persian) has its roots in the Mughlai cuisine and is a characteristic Moghul dish which can be traced back to the 16th century and to the Mughal incursions into present-day Northern India, Pakistan and Bangladesh. It is a dish consisting of meat or vegetables braised in a spiced sauce made with yogurt, cream, nut or seed paste.

Now this korma recipe is not your run of the mill what you’ll get from your local take away dish, this is taken from Rick Stein’s India when he spent time in Lucknow and this was cooked for him by Rocky and Rekha and is traditional of Lucknow.

For the coconut paste

For the Masala sauce

For the coconut paste, blend the coconut, almonds and poppy seeds together in a food processor until it becomes a paste. You will probably have to add a couple of tablespoons of hot water to give a it nice silky texture.

For the masala or sauce, blend the onions to a paste, adding a splash of water if needed.

Heat the ghee in a deep-sided pan over a medium heat, then add the cloves, green cardamom and cinnamon stick and fry for about 30 seconds to a minute. Stir in the onion paste and salt and fry for 10 minutes or until any liquid has evaporated and the onions are softened and translucent but not coloured, stir in the chilli powder, then add the chicken and fry until slightly brown. Add the water and the coconut paste, bring to a simmer and cook for a further 10 minutes.

Take the pan off the heat, stir in the yoghurt mixture, then return to a gentle heat and bring to a simmer. Cook, uncovered, for about half an hour, add a little water if it starts to stick, but cook until the chicken is cooked and the masala thick and rich. Stir in the ground black cardamom, scatter with the raisins and serve.

I always serve with some plain rice and naan bread.