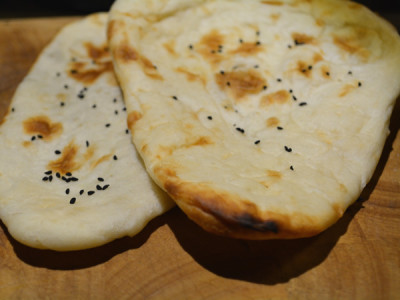 Naan bread is an all time favourite Indian bread of mine, although Chapati and Roti are also good, but Naan is my go to bread!

The word Naan is actually an English adaptation and probably comes from the Persian word Nān which basically means bread!

These days you can buy ready made naan bread is most supermarkets, but let’s be honest, they are always too dry and you can taste the preservatives. There are some pretty good frozen naans on the market, but you really can’t beat a freshly baked naan to wipe up that delicious curry!

This recipe is for making a basic plain Naan, but filled Naans are also popular.

To prepare the naan bread, sift the flours, sugar, salt and yeast into a large mixing bowl. Warm the milk and water together, to about 38°c.

Add the yogurt and melted ghee or oil to the flour mix, then pour in the warm milk/water mix and mix it all together into a soft pliable dough. Add a little more warm water gradually if need be.

Heat a pan up and when hot, roll out the first portion to a naan shape and place in the dry pan. There is no need for any oil or ghee. When it starts to puff up simply turn the naan over and cook the other side. When done put it on a warm plate and cover with a tea towel. When you have them all made, brush with some melted butter and sprinkle with Nigella seeds. That is of course optional.

Serve up with your favourite Indian recipes and enjoy!