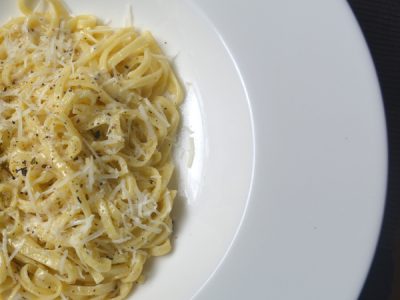 I had actually never heard of Cacio e Pepe before as it is not something you will find in your run of the mill Italian restaurants. My enlightenment came with an episode of Anthony Bourdain’s Layover series and this was a dish he had in Rome, where else! I then discovered that although such simple ingredients, getting it perfectly right is another matter. Funnily enough though, the day after I watched this episode some friends of mine travelled to Rome for a few days and I suggested they try this out and they did! They then brought me back a nice wedge of Pecorino Romano and I then proceeded to make myself Cacio e Pepe!

I looked up recipes and I found that many called for a mix of Parmesan and Pecorino. Now being a puritan I had to use only Pecorino as they would in Rome. Of course outside of Italy we are always trying to improve flavours or create our own, but the Italians do not, they do stick to their traditional ingredients. So I found the recipe I wanted to use and of course the next thing is which pasta to use? Cacio e Pepe is typically made with long, thin spaghetti, such as tonnarelli or vermicelli. I found tagliolini and thought it would work so I set to it and made this simple yet delicious recipe!

400 grams of Spaghetti (if you can find Tonnarelli better)
About 200-250 grams of high quality Pecorino Romano cheese (the more aged the better)
Black pepper to taste (better if freshly ground)
Coarse salt (yes you will need some even though Pecorino Romano has lots of salt, otherwise the dish will be bland)

In a large pot bring the water to a boil and when the water starts to boil add the salt. Remember that Pecorino Romano cheese is very salty so add HALF of the amount of salt you would usually use.Now add the pasta and cook for a few minutes until al dente.

In the meantime grate the Pecorino Romano cheese.

About 1-2 minutes before pasta is cooked, place a serving bowl on top of the pot to heat it. This is a very important step in order to get a creamy sauce.
Reserve some of the water from the cooing pasta water in a cup or bowl. This is something I do with every pasta dish apart from the baked dishes as the pasta releases starch into the water, starch is naturally sticky and it is great for making relatively dry ingredients into an almost creamy sauce.

Once the pasta and sauce is perfect the season with lots of freshly ground black pepper and toss.