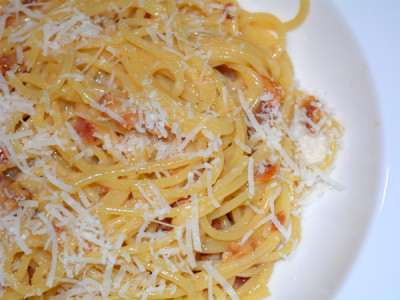 I don’t know if this interests you or not, but I am fascinated with origins of recipes and especially with their names! We have of course the Spaghetti alla Puttanesca, named infamously after prostitutes and this dish of Spaghetti alla Carbonara is no different!

Spaghetti alla Carbonara is said to be a Roman dish, not as in ancient Rome, but from 20th century Rome and the name is derived from carbonaro meaning charcoal burner and the dish was first made for the charcoal workers and was brought to the region of Lazio, from Umbria by coal men (carbonari), who came to sell charcoal to the Romans. Since then it has been adopted by the Romans and is now famous worldwide.

Spaghetti alla Carbonara is also my eldest son’s favourite Italian dish and he has become quite an expert. My recipe has finally, after two recent restaurant visits where he was totally unhappy with what they served up, has reached up to his high standards. As you all know Spaghetti alla Carbonara is a simple dish of fried diced Guanciale, which is pork cheek, but outside of Italy bacon or pancetta is used with spaghetti, then added to this is a mix of eggs and cheese, usually pecorino, grated into the eggs and beaten. As the dish is Roman, I have been told always use pecorino and never parmesan and never add cream!The spaghetti as added to the pan of fried bacon and when cooled a bit the egg mix is added and stirred well to create a creamy sauce. A little bit of the pasta water added really helps to make the sauce smooth and silky and please never use cream!! There is no salt added to this dish as the saltiness from the bacon and cheese suffices. Season only with black pepper!

Cook the pasta in a large pan of boiling salted water until al dente, which would be a couple of minutes off of the cooking time when the pasta still has a little hard bite to it.

Meanwhile, heat the oil in a pan and fry the guanciale, pancetta or bacon until crisp.

Beat the eggs in a large bowl with the grated cheese but leave some cheese to sprinkle over when serving, season with pepper.

When the pasta is ready, drain and add to the pan with the guanciale, pancetta or bacon, mix well to coat everything and take off the heat. Allow to cool slightly and then add the egg and cheese mixture, stirring to coat the pasta until it is a lovely creamy sauce.