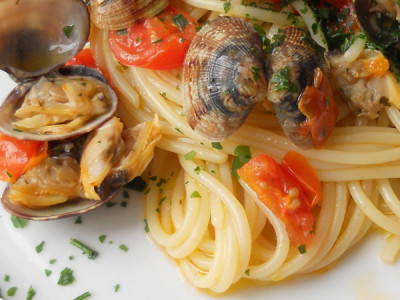 The first time I had heard of Spaghetti alle Vongole, I thought, that sounds a bit boring clams and spaghetti. But once you’ve tried this yourself you will be coming back for more!

Spaghetti alle Vongole is popular throughout Italy and in the south in Campania it is part of traditional Neapolitan cuisine.

The Italians prepare Spaghetti alle Vongole two ways. The most common is bianco, with oil, garlic, parsley and a splash of white wine and also in rosso with tomatoes and fresh basil, the addition of tomatoes being more popular in the south. I like to add the tomatoes just to add a bit of extra flavour and veg content.

Fill a large pot with water, put on to boil and in the meantime sort through your washed and cleaned up clams. If any aren’t tightly closed, give them a sharp tap and if they don’t close, throw them away.

Put a large pan with a lid on a high heat and let it heat up. Finely chop the parsley stalks, then put them to one side and roughly chop the leaves. Peel and chop the garlic and quarter the tomatoes.

Add the spaghetti to the boiling water with a good pinch of salt and cook until al dente. About 5 minutes before your spaghetti is ready put 4 generous lugs of extra virgin olive oil into the hot pan and add the garlic, parsley stalks and a good pinch of salt and pepper. Sprinkle in the dried chilli, add the chopped tomatoes and stir everything around constantly then just as the garlic starts to colour, tip in the clams and pour in the wine. It will make a bit of a fuss so give it a good shake and put on the lid. No, not on your head on the pan! Right then after about 3 or 4 minutes the clams will start to open, so keep shuffling the pan around until all of them have opened then take the pan off the heat and get rid of any clams that haven’t opened.

Now your spaghetti should be just about perfect so drain it and add to the pan of clams along with the parsley leaves and an extra drizzle of extra virgin olive oil. Stir or toss for a further minute or two to let all the beautiful juices from the clams be absorbed into the spaghetti. Serve right away with some fresh chunky bread to mop up the juices.