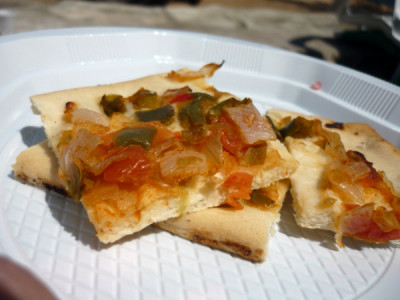 The first time I tried it, I didn’t know what it was and of course thought that it was a badly made pizza with no cheese. Of course I know better than that now and have come to thouroughly enjoy eating and making this and make sure that I get a piece or two when I am in Spain.

Coca de Verduras is simple to make, takes no time and is great in the summer with a nice cold beer or a chilled vinho blanco or tinto for that!

Coca de Verduras is eaten usually as a tapa and always when there is some sort of festival.

There are a few variations even a sweet one. My suggestion is that you put on it what you want, make it your own!

Whisk together half of the warm water with the yeast and sugar and let it stand for about 10 minutes until a frothy head forms.

Mix the flour, salt, yeast mixture, oil and lard, if you can’t get lard use butter. Add a little at a time of the remaining water to make a soft pliable dough. Knead the dough for 10 minutes and place in a bowl cover and leave in a warm place for an hour until the dough rises.

Meanwhile, mix together the peppers, tomatoes, onions, parsley, a glug of olive oil and season with sea salt to taste.

Roll out the dough to about 5mm thick and then curl up the edges a bit to make a frame. Place on a greased baking sheet and sprinkle the mixed vegetables over evenly. Bake in the oven for about 30 minutes or until looking golden. Leave to cool and serve at room temperature and then serve as a great tapa!