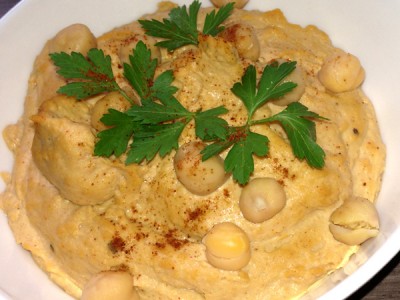 I don’t know about you but I just love Hummus! And did you know that Hummus actually means “chickpea” in Arabic so it’s no wonder where the roots of this dish came from.

Hummus is usually used as a dip with pita bread or it can be served as part of a meze or as an accompaniment to falafel, grilled chicken and fish but in Israel hummus is part of everyday eating. One reason for the popularity of hummus in Israel is the fact that it is made from ingredients that, following Kashrut (Jewish dietary laws), it can be combined with both meat and dairy meals. Few other foods can be combined with a wide variety of meals consistently with the dietary laws. And did you know that hummus is as popular amongst Israeli Jews and Israeli Arabs and as a result of its popularity, Israelis elevated hummus to become a “national food symbol” and consume more than twice as much hummus as neighbouring Arab countries. I was watching an episode of Yotam Ottolenghi travelling through Israel and Palestine recently and I think it was in the first episode he went to the most famous place to eat Hummus in Haifa and was told that not only was this the best place in Haifa but in the whole of Israel. I also saw Rick Stein’s Mediterranean Escapes he was eating a meticulously made hummus in Turkey. You can watch the video clip here.

So what is hummus? Well, quite simply it is a wonderful dip made from cooked chickpeas that are blended with tahini (sesame paste), olive oil, lemon juice, salt and garlic. It tastes absolutely fantastic and the best thing is don’t buy it, make it! It is so simple!

Drain the chickpeas in a sieve or colander and rinse well. Keep a few whole chick peas to decorate when serving.

Sprinkle with paprika and serve with pita bread, warmed in a moderate oven for three minutes, and cut into quarters.

Replace the paprika with harissa for a bit more zip or another good tip is to heat the olive oil until almost smoking add the paprika or harissa and mix then pour over the hummus.